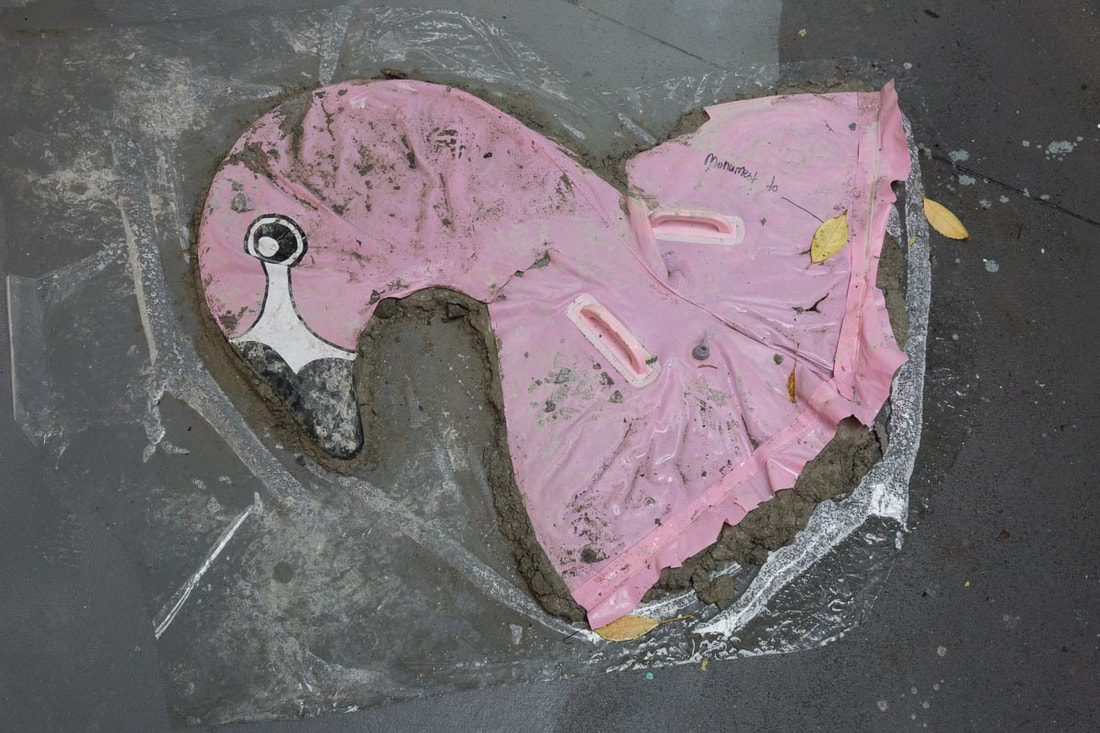 Tiana Jefferies’ work displays a distrust in iconographies. Semi formalised, semi familiar relationships form between found and fabricated objects. Incorporating found objects with casting techniques allows Jefferies to deconstruct and reconstruct ideas. These objects form expanded sculptures and installations that suggest new possibilities while flirting with representation. By pulling apart and reassembling Jefferies aims to review systems of logic and symbolic materials.
Jefferies is a recent graduate from the Queensland College of Art. They have exhibited in numerous Brisbane spaces including group shows at Queensland College of Art’s POP Gallery and Project Gallery. 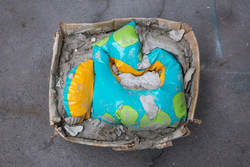 FUNNY LOOKIN'
​Interview with Tiana Jefferies
​December 2018
How do you explain your art to strangers?
I look for discarded objects to cast the space around them. I do this using plaster and concrete. I think I’m trying to suspend something held around that object – some kind of essence. Maybe if I can represent it, I can tease and toy with it? It’s very messy and clumsy process but this comes from an urgent wanting to cast a space, to embalm it and then to create tensions between it and others.

2.How does humour or play function within your work?
I think I’m drawn to the irony within dichotomies – something that’s cheerful, childish but deeply sad at the same time. These absurdities exist in a lot of places. It’s difficult to describe but I see a lot of these moments during curbside collection crawls. I remember seeing a dollhouse that someone had put on their front lawn to be taken away. This little unwanted toy house in front of a functional, lived in home seemed poignant but also absurd.

3.What books, films, academic texts etc. have been inspiring or influential to your work?
Unmonumental: The Object in the 21st Century is a book/catalogue I’ve spent a lot of time reading. It’s full of artists and essays that have really influenced and confirmed the materials I use. In terms of novels, Zadie Smith has helped me understand the multiplicity of realities and experiences. Smith’s work also reminds me that tragic moments can be comedic.

4.Who are some contemporary artists that excite you?
I like Michael Dean’s work for its unique aesthetic and anthropomorphism. It has a physicality and impetus that don’t necessarily rely on the interpretation of a hermeneutical encryption.
Oren Pinhassi is also amazing: amazing textures, amazing spatial relationships. I think he’s creating such a beautiful visual language that is grounded in a local environment and geographical context.

5.Where do you make your art? What kind of studio do you have?
I’ve worked under houses, on verandas but I’ve been very lucky to be in my university’s studio for the last four years. It’s a great place to be messy, have interesting chats with other artists and always a good place to find random materials.

6.What do you listen to when you are making?
Sometimes a podcast or artist interview. When I need to get making and find momentum, I play A Tribe Called Quest’s Low End Theory really loud.

7.What are you currently working on/obsessed with/thinking about?
Since my works are quite small, I am interested in creating some kind of framework on which to hang/suspend them. I recently found some tent poles that should do the trick. This reflects my recent thoughts about being resourceful; rejecting mastery; reflecting some of the world’s chaos; and trying to focus on a material’s physical qualities instead of what they may ‘symbolise’. I am not really interested in creating a series of iconographies for an audience to decipher. I want to create a physical impetus that may be interpreted sensitively and subjectively.
8.Know any good jokes?
I watched a documentary about how they fix steelwork together last night.
Riveting!

I wanted to make a joke about cement, but I wasn't concrete about it.