David Spooner works across soft sculpture, drawing, and collaborative projects which are often grounded in personal rituals such as running, hand-sewing, and spells. His practice is overflowing with secret narratives and colourful, imaginary bodies which stem from childhood memory and the fantasy worlds of the everyday. 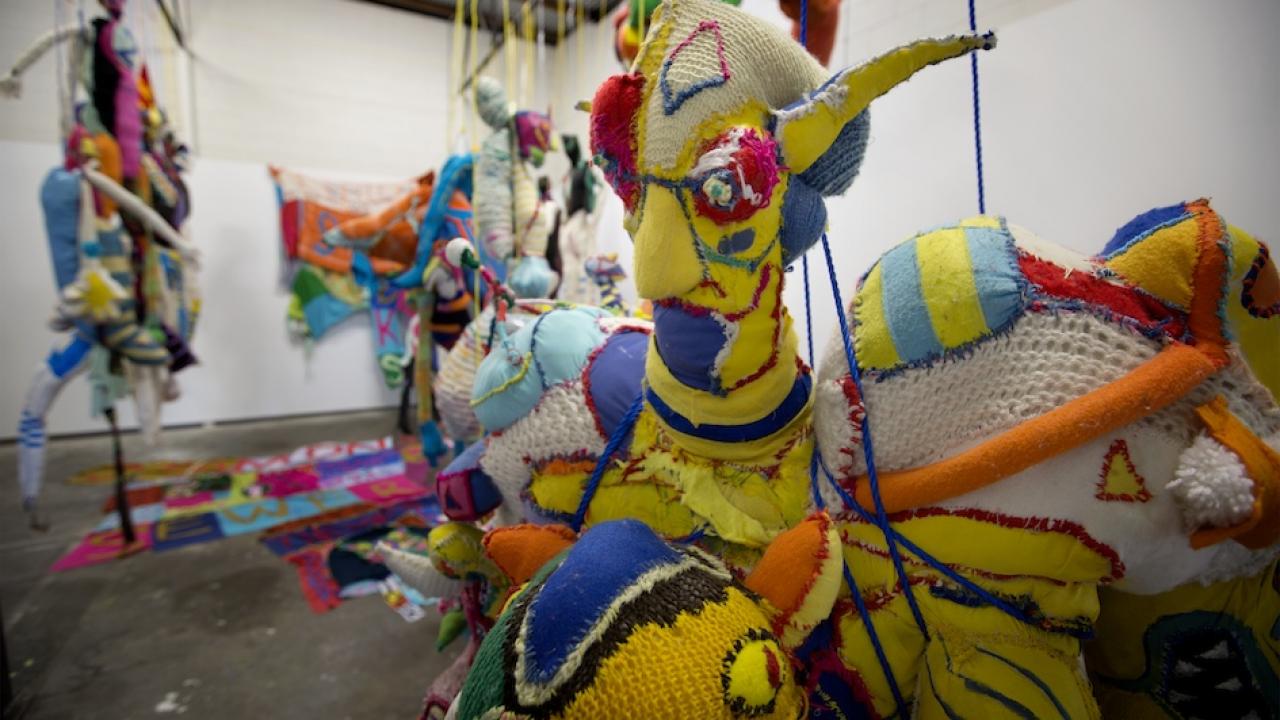 ​FUNNY LOOKIN'
Interview with David Spooner
​January 2019
1.How do you explain your art to strangers?
I give them a very vague description saying that I draw things, sew and make some soft sculpture. I have added that I do some performance lately too. I don’t really love even letting people know I am an artist because it carries a lot of baggage with it and people have their own ideas of what art is, which can be boring to wade through. Art is my invisible eye patch that I don’t like to talk about that much to strangers about. How did you lose your eye? What’s it look like under there? None of your business!


2.How does humour or play function within your work?
I like having fun. Humour and play are good ways of having fun. I think I make my best art when I am having serious fun.

3.What books, films, academic texts etc. have been inspiring or influential to your work?
I always tried to put ‘Weaveworld’ by Clive Barker into my academic writing when I was studying but never quite pulled it off. It’s about a magic carpet that people are woven into through magic symbols.
I love Xanadu, Transformers the 1986 animated film and Watership Down. I particularly like the beginning creation myth introduction of Watership Down. I saw Dancer In The Dark 3 times at the movies and took a photo of the orange patterned carpet in The Regent theatre in Brisbane because it made me feel stuff. I still would like to do something with the photos of the carpet. Perhaps a tattoo or maybe a painting. My friend’s mum asked me recently if I had seen a movie more than once at a cinema and what came to mind first was Made In America starring Whoopi Goldberg and Ted Danson. I saw it 3 times while I was in year 7. Upon further reflection I remembered I had seen Dancer in the Dark 3 times at the movies too and this sounded much better.
Everyday life is the most inspiring thing. I could try and pretend that academic texts have inspired me but I’m just not that into them. Maybe I haven’t found the right one. I once read  in a queer journal while procrastinating in the university library about straight woman writing about Captain Kirk and Dr Spock having sex with each other when Spock went through Pon Farr on one of the episodes. Apparently there was lots of different versions of Spock’s glowing green member in the fan fiction. If I ever studied again I would make sure I took it less seriously and found the academic journals that were good fun. I still dream of the yellow bounded cover of the queer journal with the pictures of vulcan dicks in it.


4.Who are some contemporary artists that excite you?
I was obsessed with Annette Messager when I was at university but now don’t really care too much about contemporary artists. I probably should but I am not at uni anymore so am not going to pretend that I love one in particular.
I like what my friend David Creed does with art and I like what my friend Laura Hill, aka Scraps does with her music/art. I love the band The Breeders. They are very inspiring to me. Contemporary art once it gets in the gallery can be a little too stuffy for me. Like academic vampires have sucked all the fun out of it but once in a while a fun one slips through the cracks.

5.Where do you make your art? What kind of studio do you have?
I make my art in my one bedroom flat. I don’t have a dedicated studio because I can’t afford it but also I think it’s more fun to make art at home. Of course it would be better if I had more space but I guess I have a lot more space than most people do in the world. I don’t live in a share house any more, so have a lot more freedom to spread out my stuff all over the place because it’s only going to get in my way.
My flat has lots of plants in it and my whole building is probably a little haunted. There’s a fish tank and I have a shelf that wraps around the room with toys I have collected over the years as well as artworks and other knick knacks.
Normally my flat is jam packed with footballer sculptures. They are hanging out in an exhibition at the moment but they’ll be back soon and I will have to renegotiate the space to fit them back in. I kind of miss them.

6.What do you listen to when you are making?
In the lead up to a recent art show I watched a television series on the world’s toughest prisons. I have been listening to Robyn’s album Honey and The Breeder’s All Nerve. Sometimes when I do my daily drawing I just put on the news.


7.What are you currently working on/obsessed with/thinking about?
I am obsessed with the Monstera Deliciosa plant. I did a couple of plant drag performances last year and have a goal this year to do 5 Monstera performances, sew a costume around the idea of Monstera and incorporate the plant into my daily drawings in one way, shape or form.
​