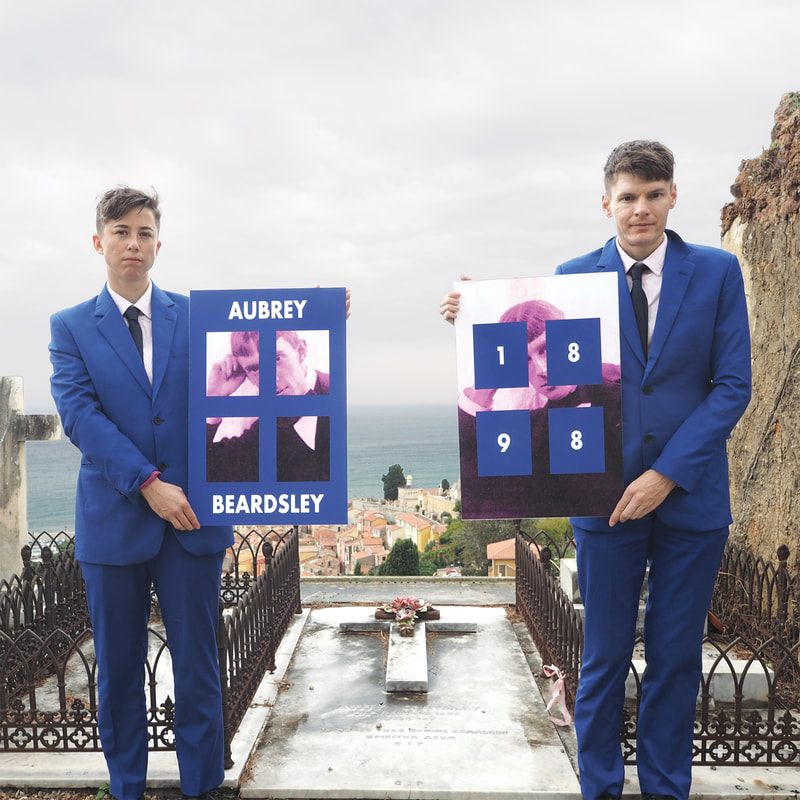 Derek Sargent and Jess Miley have been collaborating together for over three years on their performative research project ‘The Grave Project' which involves research into historic individuals who have had animpact on queer and non-normative culture. The project examinines the way the queerness of these historical figures is used in the construction of their historical biographies and how, where they lived, either by choice or not, had a profound effect on their queer story. These personal histories act as a framework to examine contemporary ideas around queer existence.

This research culminates in a pilgrimage to these individuals burial site which is documented in photography, film and text to create an alternative historical archive. Graves or burial sites are important objects in the lives of some of these figures, who have often had their public biographies highly edited or adjusted to remove or diminish their queerness and their tombstone can be the last physical evidence of their existence. Our research, pilgrimage and subsequent documentaion serve as a way to re-look at their biographical story with a queer lens.

Derek Sargent is an Australian artist currently based in Bergen Norway. He graduated from the University of South Australia with first class honours in 2013. In 2015 Sargent was awarded the Anne & Gordon Samstag international visual arts scholarship and travelled to London to complete a Graduate Diploma in Fine Art at the Chelsea College of the Arts. He is former Co-Director of the Adelaide ARI FELTspace and the former education officer at the South Australian School of Art Gallery. In 2019 he started a Masters of Fine Arts in Norway at the University of Bergen.

Jess Miley is an Australian artist and performer currently based in Gyula, Hungary. Past projects include, Shift, a durational public performance for Next Wave, there’s something I’ve been meaning to tell you for Streetworks, Forever Now with Aphids and Vitalstatstix and Crowd Theory with Simon Terrill, she is a former director of FELTspace ARI in Adelaide. In 2019 she won the SALA festival Contemporary art award along with Derek Sargent for their work The Grave Project. She is the founding director of LoveFest an annual experimental arts festival that explores notions of love and being together. In 2018 she founded ways.house a queer feminist art residency in Eastern Hungary.


​
Image details: Aubrey Beardsley (1872-1898) Cimetiere du Trabuquet - Menton Illustrating your way to infamy by being a foppish dandy artist who satirised Victorian morality, you once proclaimed, “If I’m not grotesque I’m nothing”. Becoming entwined with the British Decadents, Wilde saw you as a ‘kindred spirit’. Your big break came when he commissioned you to illustrate Salome. When Wilde went down for being a sodomite, guilt by association resulted in losing your job and standing. Rumours about your personal life were numerous, including an incestuous relationship with your sister Mabel, who became pregnant then miscarried. With tuberculosis taking hold you converted to Roman Catholicism and moved to Menton with your mother. On your deathbed, she might have forged a letter trying to destroy your obscene legacy but your publisher thought better saving your work as you passed away under the hill.